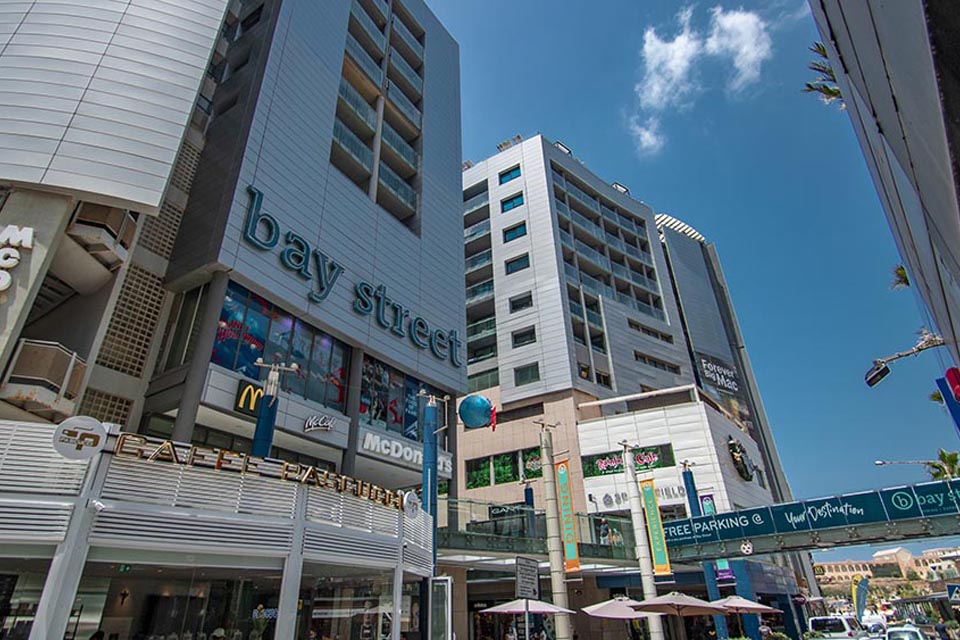 For over 20 years, Bay Street Group has been providing locals and tourists alike with top-notch entertainment in various forms in the heart of St Julian’s, which has evolved over time to reflect customers’ changing wants and needs. Today, the Group’s portfolio is based on three main pillars: Hospitality, Retail and Food and Beverage (F&B), elevating the bustling town’s offering on all three fronts.

Albert Galea, Chief Executive Officer of Bay Street Group, says since its founding in 1999, the Group has indeed come a long way – “one of the major milestones is its evolution from being a company of four shareholders and two businesses to one that now has two shareholders and four major businesses.”

In the area of hospitality, the Group operates two hotels, one of them being the four-star, urban-style be.Hotel, which consists of two connected wings built around the Bay Street Shopping Complex. With its designer-led rooms and suites, a rooftop panoramic pool and on-site restaurant, be.Hotel is a perfect complement to the shopping complex, and centrally located minutes away from St George’s Bay as well as the nightlife district of Paceville.

Meanwhile, the five-star Hyatt Regency Malta is one of the Group’s latest major investments, which forms part of the Hyatt Regency chain of hotels that specialises in accommodation for both business and leisure travellers. Its stunning design combines modern architecture with Maltese heritage, delivering a fascinating ‘past meets present’ experience.

Mr Galea explains that the recent expansion of be.Hotel is indeed a milestone in the Group’s evolution. “The rooms have doubled since it first opened, which means it can now accommodate more people than ever before. It started off with 130 rooms and now has 293,” he asserts. “Through an investment of €3.5 million, we expanded the hotel’s reception and modernised the rooms, and we can confidently say that the investment has been received well by clients while improving the overall rating of the hotel. We also invested €45 million to bring the international hotel brand, Hyatt Regency, to Malta, which offers an elevated experience for visitors.”

On the retail front, Bay Street Shopping Complex is the feather in the Group’s cap, offering a varied mix of luxury and high-street brands to suit all demographics across a floor area of 10,500sqm. Currently home to 42 brands, 28 of which are retail, these range from Guess, Harmont & Blaine and Gant to Tommy Hilfiger, Skechers, and one of the latest additions, Swedish fashion chain, Lindex. The Group also represents international brands Women’secret, Cortefiel, Springfield and Pedro del Hierro in Malta.

The CEO asserts that, over the past year, despite the enormous challenges brought about by the COVID-19 pandemic and the severe impact this has had in all areas that the Group operates in, investments continued to be made, including in the shopping complex, which was extensively refurbished “in order to be new and improved for when the world reopens again. Along with our tenants, we invested €14 million at the complex to upscale their outlets in line with international standards. For us, they are partners, and not clients.”

As for F&B, Bay Street Group operates sophisticated restaurant, Seed, led by award-winning executive chef Noel Azzopardi, which overlooks the piazza of the Hyatt Regency Malta, as well as Rainforest Cafe – the much-loved American chain which will be opening its doors in the coming weeks within the shopping complex. “Bringing the Rainforest Cafe to Bay Street took a lot of hard work and constant investment,” says Mr Galea. “In the past, there were attempts in Malta to copy the concept, but we wanted to offer the real thing to our clients, the original Rainforest Cafe , which is beloved and popular around the world, including in Disney Land and Disney World.”

Currently in its 17th year since opening its first store, The Rainforest Cafe franchise operates 45 restaurants around the world, including London, Niagara Falls, Tokyo and Paris. Created to educate its visitors on the protection and preservation of animal and plant species in the world’s tropical rainforests, the establishment offers visitors a chance to combine a variety of food, entertainment, and adventure in an impressively decorated space, complete with waterfalls, mist, and life-like animal figures.

To this end, Bay Street offers the complete experience, leaving no stone unturned in ensuring that visitors of all ages are well catered for in all manners of entertainment. Mr Galea reiterates this, adding “visitors at Bay Street can find all that they need in one place. The concept of Bay Street as a complex and hotel is a winning formula – it is unique and the first of its kind locally, while ensuring that it offers visitors inimitable experiences and something for everyone to enjoy.”

With many plans in the pipeline for the Group, which will be revealed in due course, Mr Galea says that the beauty of Bay Street Group is its ability to cater for all visitors – from business travellers to families with young children, as well as locals looking for a weekend escape in a bustling town with lots to offer.

“Here at Bay Street, we pride ourselves on providing a varied experience that everyone can enjoy, so we encourage visitors to explore all we have to offer – We guarantee that you will discover something you love,” concludes Mr Galea.